Home » Forthcoming Events, Uncategorized » The Decline of the Labour Heartlands: Myth or Reality?

The Decline of the Labour Heartlands: Myth or Reality? 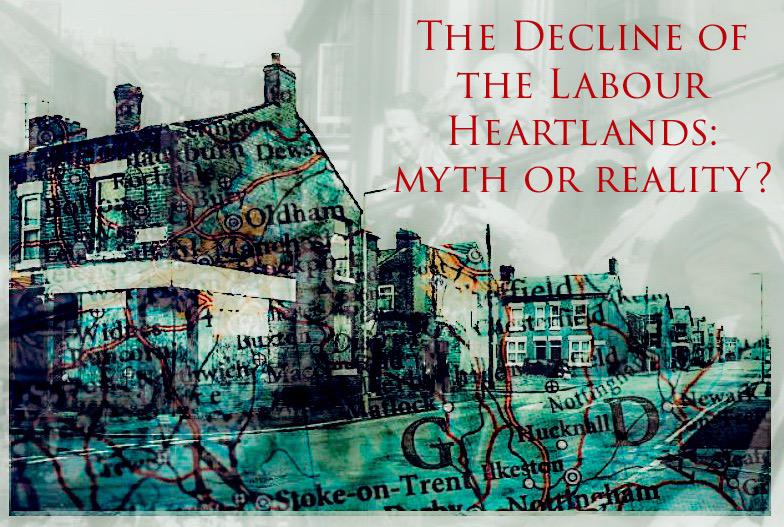 The problem of left behind communities and the supposed abandonment of traditional Northern voters have recurred as media talking points since the EU Referendum in June 2016. But do invocations of the ‘traditional Labour heartlands’ speak more to myth than material reality?  Often framed in disparaging terms such as northern Brexiteers or out of touch metropolitan elites, have responses to the referendum opened up old prejudices, which speak more of culture than class? Representations of class and regional difference may be distorted, but can the historical economic and class divisions between north and south and town and country still be traced in the political discontents of today? Can we talk about traditional Labour heartlands at a time of such fundamental political change? Join the Liverpool Salon to discuss the decline of the Labour’s northern heartlands. Is it myth or reality?

Mo Lovatt is a writer, lecturer and researcher specialising in arts & culture policy. Prior to her academic career, Mo worked for 20 years in the arts sector, predominantly in the North East of England, producing and managing a range of participatory arts projects, particularly for children and young people in both a school and a community setting. She is currently undertaking a PhD examining the impact of cultural activities upon children and their families in the former County Durham coalfields, which are classed as areas of economic disadvantage and deprivation. Mo enjoys discussion and debate. She runs a number of courses for sixth formers teaching public speaking and debating skills and is a regular judge at the Academy of Ideas Debating Matters competition. Mo appears on a number of current affairs and politics programmes for Sky, the BBC and ITV and is a regular guest on Sky News’s Sunrise programme where she reviews the morning papers.

George Hoare is a researcher and writer based in London. He holds a doctorate from the University of Oxford and has previously held research and teaching positions at Hertford College, Oxford, Leiden University College, and Fudan University in Shanghai. He is the co-author of An Introduction to Antonio Gramsci (Bloomsbury, 2016) and is one of the hosts of the global politics podcast Aufhebunga Bunga.

Dr Kevin Hickson is Senior Lecturer in Politics at the University of Liverpool and National Chair of the Social Democratic Party (SDP).  He was previously an active member of the Labour Party, including being a Prospective Parliamentary Candidate in 2015 and Leader of his local council.  In the 2016 referendum he campaigned with Labour Leave.  Since then he has been trying to uphold the democratic will of the British people to leave the EU, something that led to his departure from the Labour Party. Kevin has been widely published including most recently: Matt Beech, Kevin Hickson and Raymond Plant (eds.) The Struggle for Labour’s Soul: Understanding Labour’s Political Thought since 1945 (London: Routledge, 2018) 2nd edition and Kevin Hickson, Jasper Miles and Harry Taylor, Peter Shore: Labour’s Forgotten Patriot (London: Biteback, 2020, forthcoming).

Barry Kushner has been the Councillor for Norris Green on Liverpool City Council since 2012, and the Cabinet Member for Children’s services since 2016. In that time, Norris Green has transformed from an area of serious crime and housing dereliction, to 1700 new homes, new shops, refurbished parks and a network of support for those in hardship. As Cabinet Member Barry has led a national campaign against venture capital owned foster care and residential care companies that exploit local Councils through high and increasing fees. Barry is co-author of ‘Who Needs The Cuts’ a definitive attack on the politics of austerity that was shortlisted for a Bread and Roses literary award in 2014. Over the past 30 years, he has worked with community and voluntary organisations across the city supporting their development of education, training, community facilities, and business development.

Pauline Hadaway has worked in arts and education since 1990 and is co-founder of The Liverpool Salon, which organises public debates on a range of topics. As director of Belfast Exposed Photography between 2000 and 2013, she oversaw its transformation from a community photography resource into an internationally renowned gallery of contemporary photography. In her doctoral research at the University of Manchester, Pauline explored different uses of arts, heritage and culture as tools for peace building and economic and social reconstruction in Northern Ireland. She has been published widely, including Policing the Public Gaze (2009), a report for the campaign group The Manifesto Club;  Re-imagining Titanic, re-imaging Belfast in Relaunching Titanic: memory and marketing in the ‘post -conflict city’ (2013) and, for the National Media Museum’s web-based either/and  project. Her latest publication is Escaping the Panopticon, a chapter in Photography Reframed: visions in photographic culture, published by I.B. Tauris (2018).

The Debate
During the twentieth century, as the Labour movement established itself as a parliamentary force, the familiar patterns of Britain’s electoral map took shape, with the rural constituencies of the south shaded blue and the so-called ‘northern industrial heartlands’ of north-east England, South and West Yorkshire, Lancashire, west Cumbria, and north Staffordshire shaded red. There have been many social, economic and demographic changes since. And many defeats for the Labour movement. And yet in the 1980s, Liverpool re-established its radical credentials as ‘the city that dared to fight back’ against Margaret Thatcher’s Tory government.
Whilst the  north and south divide is still traceable, new political and economic divisions seem to be emerging in post-industrial England. In the wake of the 2016 EU referendum, Britain’s political map was re-shaded in terms of differences between wealthy remain-voting areas, such as Islington, Brighton and Guildford in the south and poorer Brexit-voting areas in post-industrial towns and coastal areas like Sunderland, Redcar, Hartlepool, Warrington, Wigan and Bolsover in the north. Some have argued that the 2019 EU elections showed the continuing decline of Labour loyalties among working class voters in the ‘traditional heartlands’ beyond metropolitan centres like Manchester and Liverpool.
Questions about the need to devolve political power to the North, the problem of left behind communities and the supposed abandonment of traditional Northern voters have recurred as media talking points since June 2016. Whilst invocations of the ‘traditional Labour heartlands’ may speak more to myth than material reality, major disparities in jobs, pay, health, transport and public services remain a point of contention between north and south, town and city. Often framed in disparaging terms such as northern Brexiteers or out of touch metropolitan elites, have responses to the referendum opened up old prejudices, which speak more of culture than class? Representations of class and regional difference may be distorted, but can the historical economic and class divisions between north and south and town and country still be traced in the political discontents of today? Can we talk about traditional heartlands at a time of such fundamental political change?
Some suggested reading:
https://neweconomics.org/2017/10/revealed-great-divide-towns-cities/
https://georgehoare.net/2018/12/10/the-left-against-the-people/
https://labourlist.org/2009/02/the-myth-of-labour-class-betrayal/
https://labourlist.org/2019/09/winning-back-labours-heartlands-like-north-east-derbyshire/