Home » Previous Events » Out with the old?

Out with the old?

From constitutional battles and economic uncertainty at home to political turbulence across Europe and a new president heading into the White House, the winds of change will continue to blow in the year ahead, but in what direction are they blowing? Are you apprehensive, in despair or exhilarated at the prospect of another year of change? Or have you simply given up making predictions? Whatever your hopes, fears, excitement or uncertainties the Liverpool Salon invites you to join a conversation on the tumulteous year that’s gone and the future that awaits.  Join thre local authors and academics who will share their knowledge of US and European politics and the economy and give their take on 2016 to start the evening off. And enjoy a glass or two of wine and a roaring fire to keep the conversation flowing. All welcome.

Kevin Bean is a lecturer in Irish politics at the Institute of Irish Studies, University of Liverpool. His research interests include Provisional republicanism, state counter-insurgency strategies and the development of nationalism as a political force in contemporary Europe. His publications include The New Politics of Sinn Féin, Liverpool 2007, ‘Defining Republicanism: Shifting Discourses of Post-Republicanism and New Nationalism’, in M. Elliott (ed.) The Long Road to Peace in Northern Ireland, Liverpool 2007; Ulster Loyalism after the Good Friday Agreement: History,Identity and Change, Basingstoke 2011; ‘Civil society, the state and conflict transformation in the nationalist community’, in M.Power (ed.), Building Peace in NorthernIreland, Liverpool (2012 ); ‘Leaving the Soundbites at home? Tony Blair, New Labour and Northern Ireland. 1993-2007’, in L. Marley (ed.),  The British Labour Party and Twentieth Century Ireland, Manchester University Press, 2016

John Hutchinson is an associate lecturer for the Open University tutoring 1st and 2nd year modules at undergraduate level for the OU Business School. He specialises in courses on leadership and change, the principles of business and management and professional communications skills. John also examines economics for national exam boards and has worked in many contexts from scrap metal processing, waste management and recycling to FE and language schools. In addition to an educational career, he continues with private consultancy in waste management and training and with SMEs. John reviews and writes for the Manchester and Liverpool Salons from time to time on themes ranging from current affairs to Hispanic cinema. He has an active interest in the arts, Spanish and South American cultures and is also a classically trained amateur singer. John is a founder member of the Liverpool Salon.

Matthew Alan Hill lectures in History at Liverpool John Moores, having formerly taughht US Politics at the School of Advanced Study, University of London. He was also the principal investigator for two US-based research projects. First, he created the Atlantic Archive: UK-US Relations In An Age Of Global War 1939-1945 online database (http://archive.atlantic-archive.org/) on official UK perspectives towards the US. It examines UK government documents discussing US economic, political and social/ cultural life. Second, in the Women and US Foreign Policy Interview Project (http://wandusfp.sas.ac.uk/) he interviewed predominantly women involved, and affected by US foreign policy. These interviews are placed into an online repository.  Matthew recently received a distinction in his Postgraduate Certificate in Learning and Teaching and is now a Fellow at the Higher Education Academy (HEA). Matthew is also the author of American Politics for Dummies 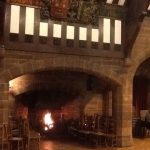