Home » Opinions, Reviews » Review ‘A View from the Bridge’ by Arthur Miller at Liverpool Playhouse 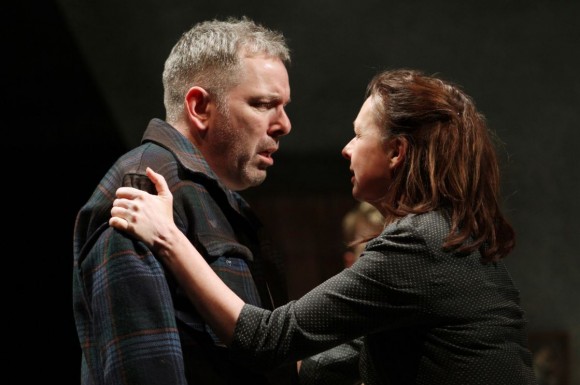 A View from the Bridge is a quintessentially modern play, painstakingly constructed through a build up of everyday events and non-events, in the accumulation of detail that epitomises existence in the modern world. Telling the troubles of a small Italian American family in 1950s Brooklyn, the power of the play lies in Miller’s genius for discovering universal meaning, within the closed up particularities of time, place and custom.

In A View from the Bridge, Longshoreman Eddie Carbone brings about his own moral and physical destruction through an act of betrayal against two brothers, Marco and Rodolpho, illegal immigrants sheltering in the family home. Driven by unfathomable and illicit passions, Eddie breaks up his young niece Catherine’s love affair with Rodolpho, by ratting on the brothers to the immigration authorities. Marco and Rodolpho, his own wife’s cousins, are arrested, to be deported back to poverty stricken Sicily. As neighbours gather in the street, Marco calls down justice on Eddie: “That one! He killed my children! That one stole the food from my children!”

Breaking the code of hospitality and communal solidarity, Eddie’s action cuts him off forever from his own community and from the comfort of family. Above all he loses the love and respect of his niece, Catherine:

“Who the hell do you think you are? You got no more right to tell nobody, nothin’! Nobody! The rest of your life, nobody! How can you listen to him? This rat! What’re you scared of? He’s a rat! He belongs in the sewer! He bites people when they sleep! He comes when nobody’s looking and poisons decent people. In the garbage he belongs!”

A View from the Bridge stages Greek tragedy in 1950s Red Hook, ‘a slum facing the bay on the seaward side of Brooklyn Bridge’, where the ‘petty troubles of the poor’ still echo with ancient tales of Calabria and Syracuse. Charlotte Gwinner’s impressive production faithfully realises the intentions of Miller’s beautifully crafted play, not only in the considered precision of its staging, but in acknowledging the significance attached to every word and gesture, however slight. The performances are clear, considered and nicely understated, with great attention paid to detail. For the audience it’s like looking in on real lives: nothing much seems to be happening, then all of a sudden the atmosphere is charged with some presentiment of loss, betrayal or disappointment. Lloyd Hutchinson’s performance captures Eddie’s complexity as a modern day hero. A decent, affable man, hard working, physically strong, Eddie struggles to maintain authority in the face of physical and moral collapse. As much at home in Liverpool as in the New York docklands, Hutchinson’s Eddie is a big man with a soft centre. The intensity of Julia Ford’s performance as Eddie’s wife Beatrice once or twice calls to mind Rachel Roberts’ tightly coiled, long suffering Margaret Hammond in This Sporting Life. Shannon Tarbet’s Catherine and Andy Apollo’s Rodolpho exquisitely express the promise, fragility and sometimes breath taking silliness of youth. In the brief moment of their freedom to hope for love, Rodolfo and Catherine speak for the many millions of migrants who stepped ashore in New York, leaving behind their little worlds in search of new world.

“There is nothing illegal about a girl falling in love with an immigrant”, the lawyer Alfieri (Bruce Alexander) tells Eddie. “There is only one legal question here: the manner in which they entered the country. But I don’t think you want to do anything about that, do you?”

A View from the Bridge is a deeply moral play, raising serious questions for our own time. What duties do we owe each other, as families, communities, societies and individual human beings? Ambiguous on the morality of traditional values, the play asks us only to take ourselves seriously, to think about the things we say and the choices we make: “There are times”, says Alfieri, as Eddie leaves his office for the last time, “when you want to spread an alarm, but nothing has happened. I knew. I knew then and there.” Alfieri knows that Eddie is about to cross a line, but as a lawyer he can only deal in what is done and knowable.

In the contemporary world when moral choices often come pre-packaged in the shape of official advice or codes of conduct, what could be more important than Miller’s reminder that even in the common run of things, actions have consequences and what people say and do is the only thing that stands between a good or a bad ending:

“You can quicker get back a million dollars that was stole, than a word that you gave away.”

Not a single word is thrown away in this well paced and well considered interpretation of Miller’s classic two-act drama. Be sure you don’t let it pass you by.

‘A View from the Bridge’ by Arthur Miller
Directed by Charlotte Gwinner
Liverpool Playhouse
Until 19 April
Box office:  0151-709 4776